We have been planning this sweet potato harvest for two years. We put our first round of pigs on this little plot contained by pallets. In June of 2008 I built this from recycled pallets: 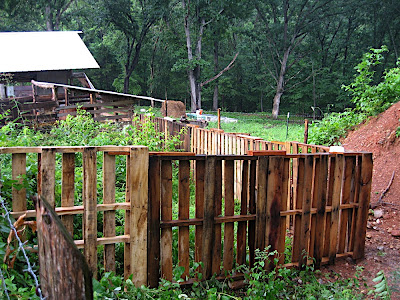 Thanks Ron.. The soil there was rocky clay and could support only the worst of weeds. Originally it was to be a calf pen but it quickly became our hog pen. Instead of shoveling most of the field cow patties into compost bins I simply threw it into their pen. They thrived in the fodder churning and rooting through it making a rich hot thick layer of almost soil. 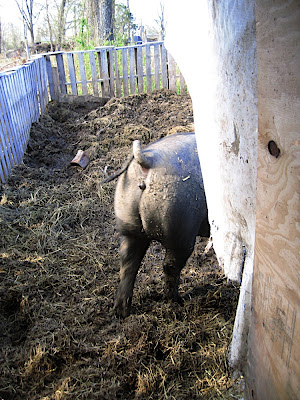 Then we left it to rest for an entire summer. All the while knowing this is where sweet potatoes will grow next season.

This past spring after struggling with sweet potato slips and their apparent decision not to grow, we finally planted a bunch of different variety slips into the their long awaited place. 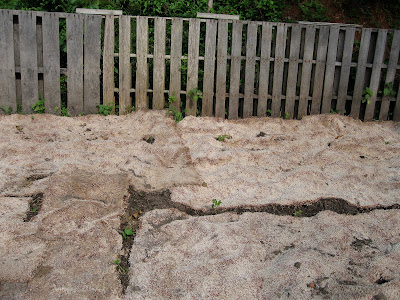 We are in the home stretch and waiting for the first killing frost. There are many views on the topic but we plan to dig them that following day. We are extremely hopeful since the vines have completely consumed the old pigpen. Also we had a failure in our butternut squash patch this year. 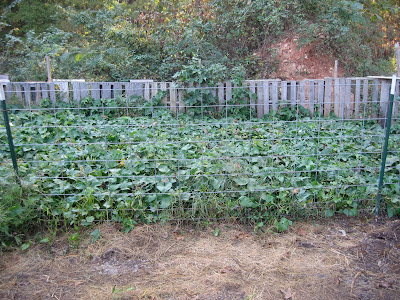 Sweet potatoes don't directly replace winter squash but we will happily have them in their stead this year. Every year is different on what fails, what is marginal and what succeeds. Mono culture would be our ruin this winter if we didn't plant with diversity in mind. Besides planting a bunch of different stuff is fun.

I will post about the harvest the day following the first killing frost.
Posted by Omelay at 6:55 AM

As I started reading this and the recycled pallets I immediately thought of Ron, then you thanked him, how funny. Sweet potato vines look great, we didn't get any out this so you'll have to eat some of those for me as well. Keep eating for me and you'll be big as a barn lol.

I planted sweet potatoes this year but I think they didn't do very well. They are Georgia Jet, the variety that does best in my zone (8).

I was just thinking I should find out when to harvest them. So you wait until the first frost? Maybe I should throw a tunnel cloche over them to extend the season a little.

Tim, i work too hard to gain much weight.

Amy, thanks for posting. I am happy to have your blog on my list now. We planted several varieties. I'll let you know which did the best here in S.W. MO.

Grew them the first time this year. Monster return on investment and found that dehydrated as thick chips and strips make awesome house dog treats. Also learned the leaves are edible and delicious. You have to cut them up and then boil for about five minutes then drain and use like you would any greens. The boiling is necessary because they have the slime like cut okra does. Super healthy like spinach but without the oxalic acid. If you eat the roots and the leaves the only waste is the really tough stems ..definitely worth planting.

Love your blog...you guys inspire me.

If we succumbed to a monoculture we'd have no food from the garden this year. Between an early year flood followed by a late summer drought, our crops were pretty disapointing this year. Most of our squashes produced no females, however our cucumbers did well. Blight struck our tomatoes pretty severely thanks to the flood, and it was too hot and humid for the peppers to ever take off. Thank goodness for root crops!

Found your blog today - have added you to my subscriptions! I too, want a bale-cob house, and also wish to live a more sustainable lifestyle, but I haven't really gotten out of the gate except for a my brand new garden that's not even finished yet.

Can't wait for what's coming next :-)

We've tried growing sweet potatoes in a bucket here in Germany...but so far have had no luck. Which is a real shame since we loooove sweet potatoes and they can be difficult and expensive to find here.

But I do love your fence! What a smart idea with the pallets!!

Oh wow, that is a big plot of them. I hope the harvest is spectacular.